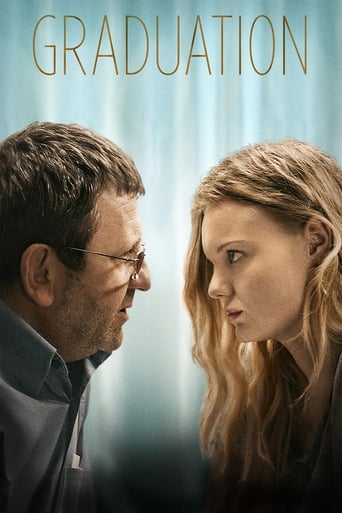 The movie Graduation tells the story of Romeo, a doctor from a small provincial town who has to decide what is the best path to follow in life for his daughter Eliza in the context of today’s Romanian society. It won an award at Cannes in the category “Best Director”.

&nbspRomeo is a father who is willing to make almost any compromise so that his daughter does not repeat his mistake of wasting his life in Romania but to continue her education and life after high school abroad where she can achieve something. His plan is close to succeeding – Eliza has won a scholarship to study psychology in the UK. She just has to pass her final exams which is a formality for such a good student. But on the day before her first exam, Eliza is assaulted in an attack that could jeopardize her entire future.

&nbspThe movie talks about the disappointment of an entire generation who really thought that after the ‘89 Romanian Revolution it would be better. About the belief of parents (universal disease) that they know what is best for their children. About the conventional marriage, from which the feelings have long since disappeared but in which the two crawl for the good of the child who should not  feel, know, suffer… but children feel, know, suffer.

&nbspThe movie director Cristian Mungiu shows us how the post-communist Romanian society works and how older people take decisions instead of young people “knowing better” than them what is good and bad for them and, as in reality, violates exactly the principles they have. -they once had a struggle with the communist system.

You can watch the movie online on the Kanopy streaming platform.