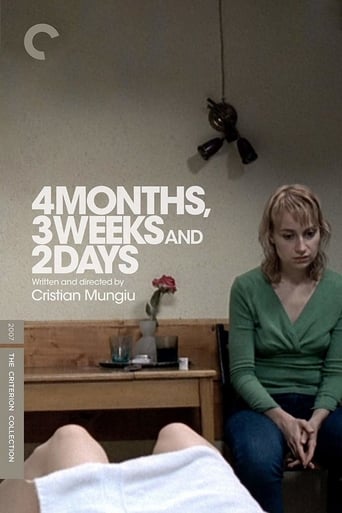 We are in the last years of communism in Romania. The movie 4 Months, 3 Weeks and 2 Days tells the story of Otilia and Găbiță, two students who share the same dorm room. At that time, abortion was forbidden. Dictator Ceausescu had issued a decree to increase the birth rate.

&nbspGabita is pregnant and despite the interdiction she decides to have an abortion. Her friend Otilia decides to help her.

&nbspThe two arrange a meeting with a doctor in a hotel room where the illegal abortion should occur. Although it does not follow a certain real case, the film is inspired by the drama that many women and families went through at that time. It’s a movie about the hard decision to keep an unwanted pregnancy or have an abortion that could cost you your freedom or even your life

&nbspIn order to reproduce as accurately possible the oppressive atmosphere of those days, the director Cristian Mungiu resorted to long scenes and close-ups and chose not to use a soundtrack. As a result, the film has won numerous international awards, including the famous Palme d’Or at the Cannes Film Festival.