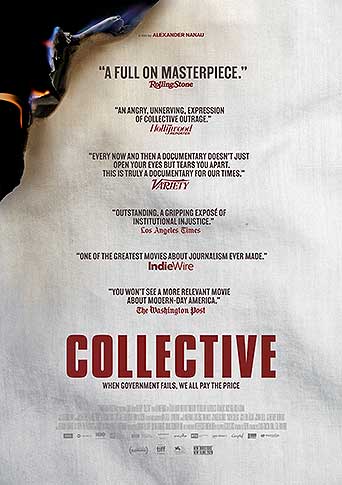 Collective (Colectiv – romanian name) is the name of a music club in Bucharest that burned to the ground in October 2015. It killed 26 people that night, injured 146 and over the following months, another 38 victims will die. This is the deadliest fire that took place in Romania. Approximately 200 to 400 people were in the club at the moment the club took fire.

&nbspThey were participating at a free concert of the metalcore band Goodbye to Gravity occasioned by the release of their new album, Mantras of War. At one moment during the concert, there was a small firework that unfortunately was directed to a pillar covered with flammable polyurethane acoustic foam. The fire spread rapidly and a lot of people couldn’t find their way out through the only exit available. This tragic event shook the Romanian society and led to massive street protest against the government.

&nbspThe documentary movie focuses its attention on the journalistic investigations that followed the tragic event and on the healing efforts of a corrupt and infected (medical) system. The journalistic efforts to bring to light the corruption and misery in the system are led by Cătălin Tolontan. On the political level the struggles of the health minister Vlad Voiculescu to make a little order in a wasteful medical system are highlighted

&nbspThe focus of this documentary is, as I said, on the press and politicians who were trying, in the twelfth hour, to bring some changes in a system that highlighted its shortcomings and defects. Do not expect to see in this documentary too much attention given to the victims, the causes that led to the tragic fire or the unfolding of the events of that evening, as I expected.

&nbspEven if it is not a bad documentary, the slightly exaggerated focus on the 2 characters (even meritorious in certain approaches), Cătălin Tolontan and Vlad Voiculescu and the somewhat chaotic way of passing from one event to another does not leave the best impression.

&nbspCollective received 2 Oscar nominations for Best International Feature Film and for Best Documentary Feature and many other nominations and awards at various film festivals.

&nbspYou can watch the translated movie online on Hulu or Amazon!