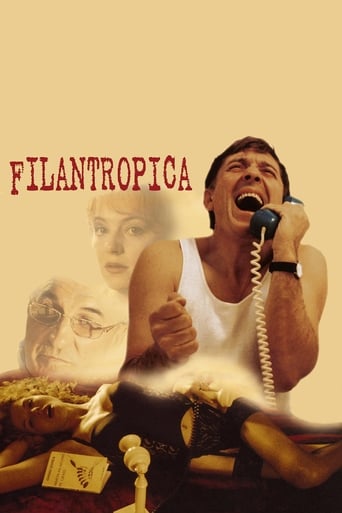 Filantropica (Philanthropy) is in my opinion one of  top romanian movies made in Romania after the 1989 Revolution. The movie satirizes the Romanian life seen through the eyes of professor Ovidiu Gorea who encounters the Romanian daily life with all its defects.

&nbspOvidiu is a 35-year-old bachelor who still lives with his parents. He is part of the class of Bucharest “beggars with diplomas”. He is a professor of literature without authority in front of his students with Mercedes and mobile phones. His book is a failure and the money he makes from sales is not enough for a tram ticket.

&nbspAs if that wasn’t enough, his life turns upside down when he meets Diana, a model with television appearances. In love, Ovidiu introduces himself as a successful novelist and convinces the young woman to go out with him. Unfortunately, one night at the club with Diana costs him a month’s salary.

&nbspDesperate to raise his income to rise to Diana’s standards, Ovidiu knows Don Pepe, “a writer for beggars, a distributor of roles for the poor.” Ovidiu accepts the role proposed by Dond Pepe and he enters the skin of a weird character night after night to raise money for his weekend escapes with Diana.

&nbspThe film is a satire of the Romanian society in which the scale of values is reversed. Intellectuals are not respected at their true value, they struggle to live a decent life while crooks thrive. Philanthropy is a movie that you can watch and rewatch without getting bored. He was very well received by both critics and the public. You can try to watch it online on the Sooner platform.