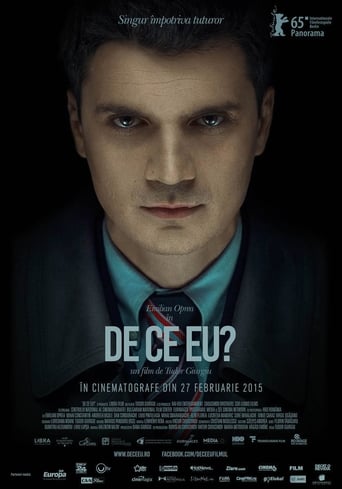 The Why me? movie is inspired by real facts that took place in the 2000s, when the young prosecutor Cristian Panait is appointed to investigate the case of a fellow senior prosecutor who has several accusations. His college is suspected of bribery, forgery and use of forgery, theft of documents.

&nbspThe investigation has extremely high implications and Panait has to choose between his career and finding the truth. A difficult decision that shatters the young magistrate’s confidence in justice.

“It is, practically, a film about the rapid disintegration of a man who chooses to fight, from within, against the system “, declares Tudor Giurgiu, the movie’s director. Prosecutor Cristian Panait committed suicide in 2002, at just 29 years old, in the context of high pressure put on him.

&nbspThe gesture of his suicide is questioned by the acquaintances of the prosecutor who states that Cristian would not have been able to make such a gesture. He was a practicing Orthodox Christian, and religion forbade him to commit suicide.

&nbspIn August 2002, the case was closed after a “post-mortem psychiatric examination” proved that the prosecutor committed suicide amid mental instability. The option of facilitating or determining the prosecutor ‘s suicide was not investigated.

&nbspThe film deserves your attention but if you know the case you will discover that the film deviates in quite essential parts from reality. You can wathc it online with subtitles on the Netflix platform.